Again Sunday (November 18, 2012) I and Dayat was invited to Beijing Bird Watchers Society (BBWS) for birdwatching in the Miyun Reservoir. This location is in the Miyun, the Google Maps location is within 102 km from Beijing. An agricultural region with a wide lake. 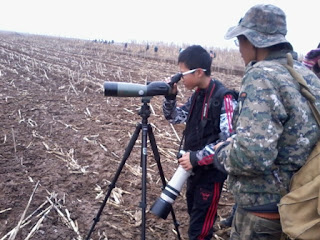 I came out of the apartment with a bike ride right after dawn prayers at 5:40. Outside it was still dark and quite cold. I wear a winter jacket that I bought in Yashow at the beginning of October yesterday.
I had to Zhongguancun station before 6:20 a.m., because we have to get together at that time. My principles if late to the bus this morning, I'm going back to my room and then sleep again. Last night I slept at 1:00 and woke up at 5:00, so it was still sleepy.
It turns out the number 355 bus quickly came. I immediately went inside and sat at the back near the door. Early morning passengers still small, only about 8 people, and most old peoples.10 minutes before the bus was to stop Zhongguancun station.
In Zhongguancun, and I and Dayat got a call from a friend BBWS-Li Bao- if we must collect in Hadianguancun Station. Pretty close, about 1 Km. Finally we get there soon.
Li Bao is give warning to Dayat if people not to smoke in Forest Park while birdwatching weekend. He is also an enthusiastic showing names and pictures of birds in Field Book of Birds in China

Then we followed him to walk toward the building behind the station. There was a building such as a school, the gate was closed with one guard. Turns out it was Middle School. Shortly afterwards one bus capacity of 40 people and 1 minibus capacity of 15 people came.
Then followed a few students who turned out was junior high school. That makes me and Dayat jealous because they are carrying an expensive DSLR camera with a 'thermos-flask' (big size 500mm lens). 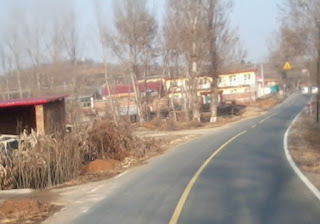 Travel outside of Beijing along a deserted highway. There are only 2-3 vehicles. Very different to the Indonesian which toll roads full of vehicles. Right side of the road is full of rocks and hills trees leaves twigs and branches, because its leaves in the winter moult.
Group then passes some rural farmland empty. May have just harvested. In front of the houses look much corn pile. Some seed corn drying on a small road near his home. There are also some models of greenhouses with permanent buildings with tarps to cover an area of ​​about 30x6 meters.
Around 08.30 the group stopped in transit locations. Several people, including the bus driver to the toilet. I also go to the toilet. I use baby wipes to wash the filth from being exposed.

Then the group left again. 30 minutes later we stopped at the edge of a river bridge which is quite large with some 'grass land' (grassland). We went straight down. Which leads directly monocular camera equipment and set up equipment. Some young teachers also issued a thermos-flask camera. 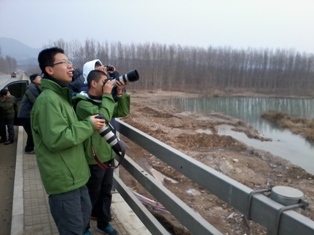 Birdwatching in the bridge. Quite of ducks in the river.

Bird in this location is kind of duck. There are also certain types of birds whose names I forget, because I was busy taking pictures of students engrossed with the DSLR Camera. Each discovered a new type of Li Bao shows pictures and names of Latin on us.
The journey continues around 20 Km. Then enter the open rural land, no crops. The ground road. Apparently the road was closed by some residents for drying corn kernels, as in Indonesia, the drying of grain on the road.

Finally, we reverse the direction. Group into another location. Agricultural areas as well, but there is a lake. This is the Miyun Reservoir. The land is like kind grumusol, feels tough, sticky and slippery shoes. We have to be careful as the road. Not too cold outside, but still have to wear a jacket, gloves and headwear. Especially me.
The lake is very broad, as there are fishing boats as well. Some of the cars seen at the edge of the lake. Apparently they angler/fisherman. The majority of water birds such as duck, goose, and swan.
The many types of duck while swimming in the lake, standing on the edge of the lake, and when the fly makes stunning scenery. Especially for me the first time it saw. Subhanallah, it is The Greatness of God creating extraordinary creatures.

Everything is right in a comfortable position to photograph and observe with binocular or monocular.
When encountered all kinds of new interested to observe and photograph. Like when seen raptor kind Harrier was flying a large enough soaring. Then the type of shore bird other than duck-goose-swan. Must be observant to find the type of shore bird because there are only one or two individuals in the lake da tone among many duck. The body color almost similar to the duck and the environment. Pretty good camouflage.
Our long enough at this location. Until students are issued a packed lunch. The majority of bringing lunch of bread, one or two people bring their lunch of rice. Good thing I brought bread and snack chips. Not bad for the stomach are hungry faster because of the cold.
I give Dayat bread because he hadn’t a breakfast. Coffee ‘tongkat ali’ from Malaysia that are in the flask pretty cure your thirst and keep warm. I fell fresh. Li Bao bring some oranges, he shared with friends each one including me and Dayat. I can only share a snack of chips that I bought yesterday at the campus store.
We are satisfied at this location. I'm also quite pleased with the pictures taken in front of the lake. Enough to publish on Facebook, hehehee,,J. 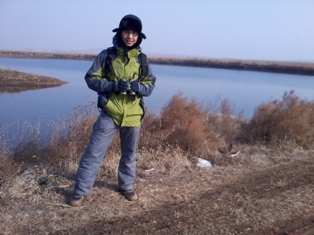 Around 14:00 we walked away towards the bus. Along the way our eyes stay alert to observe if there is another type. It was true. We find a new type that was perched on the dried corn. Soon some people pull out the camera.
At 14:30 the bus we had to walk away to Beijing again. The majority of the passengers slept during the trip, including me, Dayat and Li Bao. I do Dhuhur and Asr  prayings in the bus.
Until proper school again at 17:00, fortunately I did Maghrib prayings. Then we all went out to the school. All the students had gone home. We joined some teachers to go into a laboratory.

In front of the laboratory there is room display cabinet with many species of birds that have been offset. One is the large size of the eagle. There is also another panda in the window, the size of sea turtles with almost 1 meter size, monkeys, and lizards.
Camera was brought in one of his teachers is the school facility. Facilities are expensive. In the laboratory there are several books and magazines or journals. Apparently the school magazine that contains activities in nature, very interesting lesson method, especially in nature.
We also met senior teachers and get acquainted. Then we were invited to dinner at a restaurant near the school. We entered the restaurant maintained her privacy, which is one room only 1 table with 10 chairs.
Dayat tell Li Bao if we are Muslim. We also talked about the birds in China and Indonesia. Especially Dayat that his professor’s conduct research on the spread of the green jungle fowl (Gallus gallus) in Asia and Africa.

From 18:20 o'clock we had to finish at 19.30. we would like to thank the senior teachers who have been treating us. We go home.
The night before bed I squeeze in writing birdwatching experience in Miyun Reservoir in Indonesia Community website in China in www.mumpungkumpul.com. Ah, it was amemorable trip. No loss leave  Forestry Economy class on this morning.